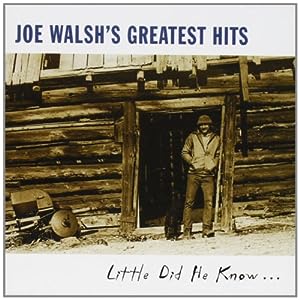 $7.49
As of 2022-09-16 16:02:10 UTC (more info)
Not Available - stock arriving soon
Buy Now from Amazon
Product prices and availability are accurate as of 2022-09-16 16:02:10 UTC and are subject to change. Any price and availability information displayed on http://www.amazon.com/ at the time of purchase will apply to the purchase of this product.
See All Product Reviews

Joe Walsh's blues-edged guitar riffs helped define the 'take no prisoners' approach to the rowdy rock & roll party of the seventies. His vocals and guitar work were a call to arms to cut loose and get down. Prior to his well-received service with the Eagles, ,Walsh headed the James Gang, writing and singing their hits, "Walk Away," "The Bomber" and the Beatles-influenced "Midnight Man." All of these and more are contained in this best-of compilation. Along with a healthy portion of his work with the James Gang, this disc also features selections from his solo releases of the '80s, including the sardonic "Life's Been Good" and the rocking "All Night Long."

Good-natured rock & roll wise guy Joe Walsh not only made a name for himself as guitarist for The Eagles and The James Gang, but he also had a successful solo career. Known for his self-deprecating sense of humor ("Life's Been Good") and his dirty guitar boogie (the pulsating "Rocky Mountain Way"), Walsh drew a fan base from those who were fond of the harder edge he gave to The Eagles. He was easily one of the better guitarists of his generation, not so much for flashy licks but for his rhythmic sensibilities and awareness of restraint and economy. Yet Walsh continued to view himself as an "Ordinary Average Guy." His keen self-awareness and his understanding of the importance of rock in the overall scheme of things was further evidenced in "A Life of Illusion." Even the title of this collection, Greatest Hits: Little Did He Know shows Walsh, for all of his talent, never lost sight of the fact that it's only rock & roll. The album also contains the memorable "Funk#49," "Bolero," and "Midnight Man." --Steve Gdula