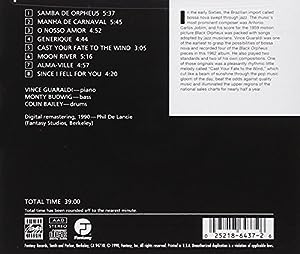 $9.99
As of 2020-09-26 05:13:54 UTC (more info)
Not Available - stock arriving soon
Buy Now from Amazon
Product prices and availability are accurate as of 2020-09-26 05:13:54 UTC and are subject to change. Any price and availability information displayed on http://www.amazon.com/ at the time of purchase will apply to the purchase of this product.
See All Product Reviews

1962 album from the Jazz composer and pianist. The album's hit single, 'Cast Your Fate To The Wind', won Guaraldi a Grammy and introduced him to a mainstream audience, who would later embrace the music he created for a host of Peanuts TV specials.

Among the early '60s wave of American jazzmen entranced by Brazilian music, none proved more ebullient than pianist Vince Guaraldi, whose homage to a 1959 film retelling the Orpheus myth as an underclass Rio de Janeiro romance proved a sleeper hit. With Guaraldi's fleet, always rhythmic piano driving these concise trio settings, Black Orpheus remains a seductive delight, probing the then-exotic push and pull of samba with glee, but leaving ample room for more contemplative ballads that remain deeply affecting more than three decades after the album's release. Luis Bonfa's and Antonio Carlos Jobim's music was the seed for the project, yielding a percolating "Samba de Orpheus" and the haunting ballad, "Manha de Carnaval," but the album's best-known performance remains Guaraldi's own wistful and swinging "Cast Your Fate to the Wind." A surprise single hit in 1965, the song would later receive a more expansive pop cover, but it's Guaraldi's original that remains the superior performance--a wordless romantic reverie that speaks volumes in Guaraldi's tender verses, muscular choruses, and romping bridge. --Sam Sutherland