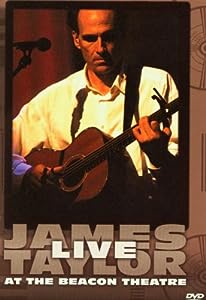 $11.98
As of 2021-10-25 11:57:19 UTC (more info)
Not Available - stock arriving soon
Buy Now from Amazon
Product prices and availability are accurate as of 2021-10-25 11:57:19 UTC and are subject to change. Any price and availability information displayed on http://www.amazon.com/ at the time of purchase will apply to the purchase of this product.
See All Product Reviews

TAYLOR AND HIS BAND ARE FILMED IN CONCERT AT BOSTON'S BEACON THEATRE, PERFORMING CLASSICS AND SONGS FROM THE HOURGLASS ALBUM.

Sensitive singer-songwriter, soft-rock poster boy, boomer troubadour: James Taylor has outlived the stereotypes offered by fans and critics alike by simply staying his musical course and continuing to refine his familiar, deceptively mellifluous style. This 1998 concert displays Taylor's craftsmanship and easy rapport with both his band and his audience to satisfying effect, offering a repertoire that draws from his entire career while providing a generous selection of songs from his Grammy-winning 1997 set, Hourglass. Fans will love it, of course, but even jaded listeners can find fresh feeling and formidable expertise here.

By now, Taylor's skill at low-key love songs is a given, making him an archetypal "sensitive New Age guy" on the strength of his canny mix of emotional vulnerability, romantic imagery, and understated delivery. Less obviously, Taylor has gradually transformed the shadows of disillusionment audible in his earliest songs into a nuanced acknowledgment of his own age. "Line 'Em Up," from Hourglass, typifies his skill at limning disarmingly lucid, frankly philosophical vignettes, here woven around a recollection of Richard Nixon's last hurrah, while "Jump Up Behind Me" affords a testament to self-determination ultimately as serious in theme as it is buoyant in its musical framework. Throughout, Taylor's stage band proves a thoroughbred, its accompaniment rock solid and delicately detailed, and perfectly matched to a crack backing chorus.

Among the first video concerts produced with DVD in mind, Live at the Beacon Theatre has been in heavy rotation in home demonstration suites ever since its release, an achievement understandable after hearing the crystalline 5.1 mix engineered by Frank Filipetti, who shared a Grammy as coproducer on Hourglass and snagged a second award for his engineering of that album. --Sam Sutherland

Both Sides Now - The Very Best Of