Jacques Brel is Alive and Well and Living in Paris 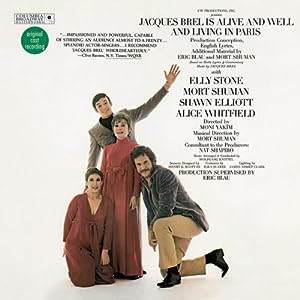 Jacques Brel is Alive and Well and Living in Paris

$6.55
As of 2023-02-01 14:21:34 UTC (more info)
Not Available - stock arriving soon
Buy Now from Amazon
Product prices and availability are accurate as of 2023-02-01 14:21:34 UTC and are subject to change. Any price and availability information displayed on http://www.amazon.com/ at the time of purchase will apply to the purchase of this product.
See All Product Reviews

At the time of this show's 1968 Greenwich Village debut, French singer-songwriter Jacques Brel's body of theatrically insightful ballads was already an obscure but deeply influential treasure trove for many American musicians. The revue's success would go on to influence artists as diverse as Leonard Cohen, Bowie (who covered "Amsterdam" shortly thereafter), and Sinatra, and it may even be responsible for one-hit wonder Terry Jacks's revival of "Seasons in the Sun".

More important, the pioneering musical-without-a-book helped introduce Brel's oft-brooding, ever evocative art to a wider American audience--and arguably had an evolutionary influence on Broadway itself. This complete reissue of the 1968 boxed set cast album offers up a rich cross-section of Brel's songs about life, death, and love--and typically sharp-eyed observations about the human follies that season them--deftly performed by a cast that includes Elly Stone, Alice Whitfield, Shawn Elliott, and, crucially, rock pioneer, Brel associate, and co-producer Mort Shuman. This new edition fleshes out the set with the sessions' only unreleased song, a sprightly take on the deliciously cynical "The Middle Class." --Jerry McCulley

The Best Of Gerald Levert

When It's Dark Out