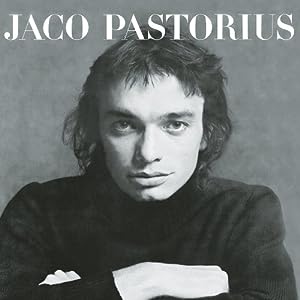 $7.67
As of 2021-06-20 00:12:23 UTC (more info)
Not Available - stock arriving soon
Buy Now from Amazon
Product prices and availability are accurate as of 2021-06-20 00:12:23 UTC and are subject to change. Any price and availability information displayed on http://www.amazon.com/ at the time of purchase will apply to the purchase of this product.
See All Product Reviews

In 1976, the first 10 minutes of this eponymous disc took the listener on a jazz world cruise directed by the instrumentalist-composer Jaco Pastorius, who thus gave notice that there was a new sheriff in town and that narrow definitions of jazz would simply not do. More so even than his groundbreaking work as a member of Weather Report, Jaco's music on this, his debut album as a leader (and in a trio setting with his soulmate Pat Metheny on the guitarist's maiden voyage, Bright Size Life), defines his greatness, his outreach, and his ambition. Boppish changes à la Miles Davis come through with Jaco's incredible touch, tone phrasing, and rhythmic locomotion--as does the musical leap of faith from bebop to funky-butt R&B delivered with lyrical majesty on Jaco's aptly titled "Continuum."

This reissue greatly enhances the fidelity of Jaco Pastorius, particularly in the bassist's famous, elusive tone, from lightly chorused, vocal-tenorlike glissandos on "Continuum" and the bell-like harmonics of "Portrait of Tracy" to his percussive, hand-drumlike rhythmic cycles underneath Peter Gordon's august French horn on "Oknokole Y Trompa." Even more stunning are the manner in which Jaco deploys a steel drum choir underneath Wayne Shorter on "Opus Pocus" and the ferocious Latin-inflected groove Jaco, Lenny White, and Don Alias conjure under Herbie Hancock on two takes--one unissued until now--of "(Used to Be a) Cha-Cha." Pat Metheny contributes an extraordinary set of liner notes to this set, putting Jaco's contributions to jazz and the bass in sharp perspective. Still, a spirit of innovation and discovery suffuses every note on Jaco Pastorius, and it is startling how modern and engaging this music remains. --Chip Stern