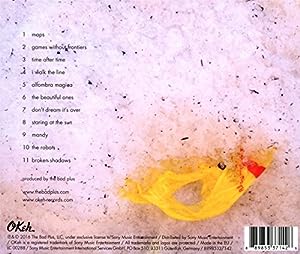 $9.86
As of 2020-09-19 19:25:48 UTC (more info)
Not Available - stock arriving soon
Buy Now from Amazon
Product prices and availability are accurate as of 2020-09-19 19:25:48 UTC and are subject to change. Any price and availability information displayed on http://www.amazon.com/ at the time of purchase will apply to the purchase of this product.
See All Product Reviews

The Bad Plus eleventh studio recording, It s Hard sees the leaderless trio bassist Reid Anderson, pianist Ethan Iverson, and drummer David King returning to the distinctive deconstruction of pop forms that first drew them international attention almost two decades ago. Recorded this past April at NYC s Brooklyn Recording with longtime engineer Pete Rende (Joshua Redman, Bill McHenry), the album spans both era and inspiration as The Bad Plus offer new perspectives on classic songs from the 1970s to the 2010s.

While the four most recent Bad Plus albums have focused on predominantly original material, It s Hard showcases the trio s inimitable gift for intrepid and audacious interpretation. A lyrical take on Crowded House s Don t Dream It s Over stands alongside the motorik futurism of Kraftwerk s The Robots and the post-millennial indie creativity of Yeah Yeah Yeahs Maps and TV On The Radio s Staring At The Sun, altering pop, prog rock, country, psychedelia, and more via an unmatched gift for wit, harmonic innovation and rhythmic brilliance. Their expressive reading of Prince s The Beautiful Ones -- coincidentally recorded a month before the legend s untimely death is a potent tribute to a figure that loomed large in the lives of these Minnesotan musicians.

The Bad Plus has spent nearly two decades expanding the parameters of what is expected of a piano-bass-drums trio. The genre-smashing band has crafted a repertoire of innovative original music, along with a daring series of iconoclastic covers spanning such diverse artists as Nirvana and Neil Young, Aphex Twin and Ornette Coleman. No matter the material, The Bad Plus continue to mine the very same aesthetic principles that inspired their inception, exploring myriad musical forms through the unparalleled interpretive power of jazz.