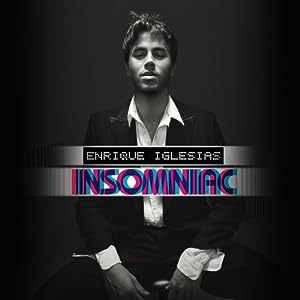 $9.49
As of 2023-01-31 04:38:16 UTC (more info)
Not Available - stock arriving soon
Buy Now from Amazon
Product prices and availability are accurate as of 2023-01-31 04:38:16 UTC and are subject to change. Any price and availability information displayed on http://www.amazon.com/ at the time of purchase will apply to the purchase of this product.
See All Product Reviews

Enrique Iglesias has sold 40 million albums in a little over a decade, becoming one of the most successful artists in the history of popular music. He has spent the past three years crafting his latest album.

Entitled "Insomniac," a humorous nod to Enrique's sleepless nights and obsessive artistic persona, the record is clearly the most ambitious project of his phenomenal career.

After three years of tossing and turning in anticipation of a new Enrique Iglesias disc, fans of the Latin superstar may find themselves losing still more sleep over early reviews that take Insomniac to task for straying too far from the sound that launched him to the loverman stratosphere. No need, though. Despite the presence of Lil' Wayne on the ultra-steamy, street-edged "Push" and some unapologetically catchy pop tunes any male singer, ethnicity aside, could have fun with ("Do You Know," for example, and "Tired of Being Sorry," a Ringside re-tread), white-hot machismo and Latin charm permeate Insomniac reliably. "Little Girl" sends out liquid-eyed outpourings of love to the ladies, "Don't You Forget About Me" delivers a sweet lament over a melting guitar line, and three late Spanish-language tracks--though they're just translations of English versions that preceded them--manage to lift the whole thing into a romantic shangri-la. If it's a peppier shangri-la than normal, chalk it up to No-Doz; Iglesias admits in the liner notes that he, himself, is the insomniac the disc was named for. --Tammy La Gorce