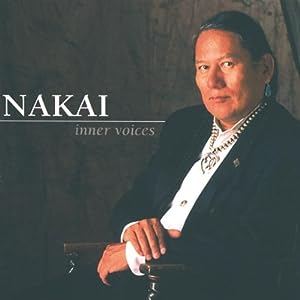 $9.25
As of 2021-06-25 01:13:26 UTC (more info)
Not Available - stock arriving soon
Buy Now from Amazon
Product prices and availability are accurate as of 2021-06-25 01:13:26 UTC and are subject to change. Any price and availability information displayed on http://www.amazon.com/ at the time of purchase will apply to the purchase of this product.
See All Product Reviews

Inner Voices presents the haunting flute melodies of R. Carlos Nakai with the richness of a string ensemble in new arrangements of Nakai's melodies. The evocative power of the traditional flute is enhanced by the lush harmonies of violin, viola, cell and double bass in arrangement by two-time Grammy Award winner, Billy Williams. Williams' arrangements create a tranquil soundscape for the mellow tone of Nakai's flute that takes the listener on a meditative and peaceful journey into the inner world of memory and dreams. The ten songs include eight melodies drawn from earlier albums plus a luminescent rendition of the eternally popular Amazing Grace.

With Inner Voices, R. Carlos Nakai revisits some familiar ground with new renditions of previously recorded material. Here the Native American flautist-composer's deeply resonant tones are countered and buoyed by Billy Williams's gently majestic arrangements consisting of violin, viola, cello, and bass. The title cut comes from 1998's Mythic Dreamer yet here takes on a more classic feel. The orchestra employs restrained and thoughtful strings, which in turn echo the melody line, play opposite Nakai for a grounded effect, and embolden the composition with gorgeously understated flourishes such as a low cello rumble or a slightly dissonant violin fill. On other standouts such as "12/20/82 Song" and "Winter Solstice," both on Changes, the artist's debut recording, Nakai's cedar flute beckons a return to balance, growth, and healing. The traditional hymn "Amazing Grace," having earlier appeared on Emergence, here becomes an aural blessing, as Williams's sweeping arrangements recall America's great Western plains and Nakai's melody floats above as an eagle on strong wind. --Paige La Grone

Michael Flatley - Lord of the Dance