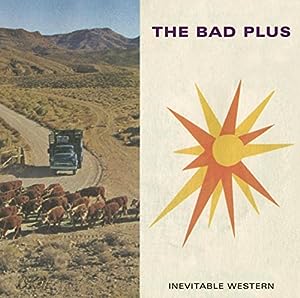 $11.99
As of 2022-09-19 04:03:40 UTC (more info)
Not Available - stock arriving soon
Buy Now from Amazon
Product prices and availability are accurate as of 2022-09-19 04:03:40 UTC and are subject to change. Any price and availability information displayed on http://www.amazon.com/ at the time of purchase will apply to the purchase of this product.
See All Product Reviews

The Bad Plus tenth studio recording (and first collection of original material since 2012's "Made Possible"), "Inevitable Western" continues the leaderless trio's committed belief in what they've dubbed avant-garde populism' the idea that serious music can be as engaging and accessible as it is forward-thinking and provocative.
The album sees the group exploring the same set of aesthetic principles that fired their inception, a rigorous exploration of myriad musical forms born of jazz but advanced using any sonic source material that forwards
their own indefinable thing. That primary spark continues to burn on tracks like Anderson s lyrical "Do It Again" or the post rock twists and turns of King's "Gold Prisms Incorporated" The Iverson composition which gives "Inevitable Western" its title, evokes a wide-open milieu redolent of Wim Wenders' Paris, Texas and the American west of Richard Avedon. Rich with humor and mystery, "Inevitable Western" is The Bad Plus at their best, affirming them as one of the most audacious and imaginative musical collectives of this or any other era. The Bad Plus bassist Reid Anderson, pianist Ethan Iverson, and drummer David King have a well earned reputation for daring deconstruction, pushing the limits on what is expected of a piano-bass-drums trio. The past 15 years have seen the genre-smashing band creating a distinctive and original repertoire of inventive and exciting original music, along with a series of iconoclastic covers of such divergent artists as Nirvana and Neil Young, Aphex Twin and Ornette Coleman. Most recently, the acclaimed trio took on one of the most influential works of the 20th century, Igor Stravinsky's "The Rite of Spring," released earlier this year.