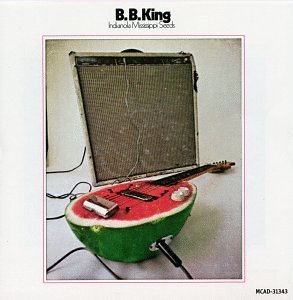 $7.80
As of 2021-07-25 13:38:53 UTC (more info)
Not Available - stock arriving soon
Buy Now from Amazon
Product prices and availability are accurate as of 2021-07-25 13:38:53 UTC and are subject to change. Any price and availability information displayed on http://www.amazon.com/ at the time of purchase will apply to the purchase of this product.
See All Product Reviews

Joe Walsh, Carole King and Leon Russell join B.B. on this 1970 pop style blues album. Features Nobody Loves Me But My Mother; Ask Me No Questions; Until I'm Dead and Cold; Chains and Things; Hummingbird , and more!

In the late '60s and early '70s, B.B. King made a series of albums in Los Angeles using rock-world ringers and session players as ABC sought to replicate the chart success of "The Thrill Is Gone." These recordings are mostly dispassionate filler, but this album is an exception. Produced by Bill Szymczyk and featuring guitarist Joe Walsh, pianists Carole King and Leon Russell, and drummer Russ Kunkel among its players, B.B. delivers minor classics in the stirring "King's Special" and the hard blues "Until I'm Dead and Cold." He also takes his only recorded turn at piano, vamping briefly through a flippant croon he calls "Nobody Loves Me But My Mother (And She Could Be Jiving Too)." --Ted Drozdowski

The Very Best of Michael McDonald