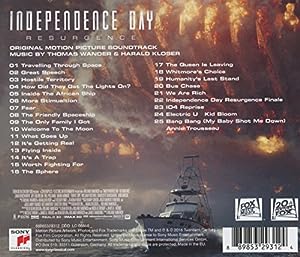 $1.68
As of 2020-09-15 17:51:07 UTC (more info)
Not Available - stock arriving soon
Buy Now from Amazon
Product prices and availability are accurate as of 2020-09-15 17:51:07 UTC and are subject to change. Any price and availability information displayed on http://www.amazon.com/ at the time of purchase will apply to the purchase of this product.
See All Product Reviews

We always knew they were coming back. After Independence Day redefined the event movie genre, the next epic chapter delivers global spectacle on an unimaginable scale. Using recovered alien technology, the nations of Earth have collaborated on an immense defense program to protect the planet. But nothing can prepare us for the aliens' advanced and unprecedented force. Only the ingenuity of a few brave men and women can bring our world back from the brink of extinction. Independence Day: Resurgence is the sequel to the 1996 worldwide blockbuster and features many actors reprieving their roles including Jeff Goldblum, Bill Pullman, Vivica A. Fox, Brent Spiner and Judd Hirsch along with newcomers Liam Hemsworth (Hunger Games) and Joey King (Fargo, Stonewall). Independence Day: Resurgence will open in theaters nationwide on June 24, 2016.

Austrian composers Thomas Wander and Harald Kloser have teamed up to work on many action/drama movie scores including The Day After Tomorrow, White House Down and 10,000 BC. Kloser & Wander won the BMI Film Music Award for their score to 10,000 BC in 2008. Separately, Kloser has composed the score for the blockbuster Alien vs. Predator and Wander wrote the score music for the popular series Buffy the Vampire Slayer.

Lift To The Scaffold

only $7.69
Not Available
View Add to Cart

We Are X Soundtrack

The Bridges of Madison County by Ghostli...