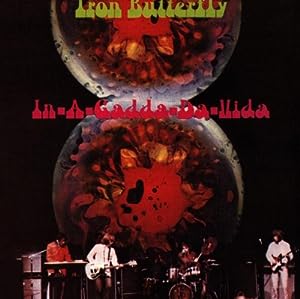 $4.91
As of 2022-11-22 01:15:24 UTC (more info)
Not Available - stock arriving soon
Buy Now from Amazon
Product prices and availability are accurate as of 2022-11-22 01:15:24 UTC and are subject to change. Any price and availability information displayed on http://www.amazon.com/ at the time of purchase will apply to the purchase of this product.
See All Product Reviews

Iron Butterfly's 1968 album veritably defined the burgeoning genre of hard-rock, primarily by way of its utterly over-the-top title cut. Reportedly composed by keyboardist/lead singer Doug Ingle in such a stoned-out, numb-tongued condition that he couldn't properly pronounce its intended title--"In the Garden of Eden"--the track seemed almost a parody of every excessive inclination of psychedelia. Melodramatic vocals, repetitive riffing, aimless solos--you name it, this 17-minute behemoth had it. Aided by FM DJs who loved to program it in its entirety so they could take "legitimate" breaks, it became an unavoidable hit--and an anthem of its era. --Billy Altman