If You Could Read My Mind (CD+DVD) 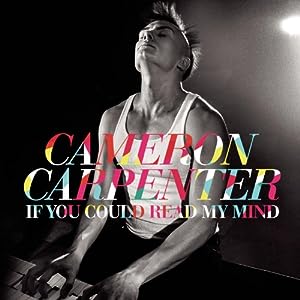 If You Could Read My Mind (CD+DVD)

A virtuoso composer-performer unique among organists, Cameron Carpenter's approach is to smash the stereotypes of organists and organ music. Described as "extravagantly talented" (New York Times), and "smasher of cultural and classical music taboos," (The New Yorker), Cameron is the first organist ever nominated for a Grammy Award® for his debut album, Revolutionary. If You Could Read My Mind is the first recording made on Cameron's new International Touring Organ. The organ, designed by Cameron himself, is a mobile digital organ that is artistically and sonically equal to any of the world's great organs and will challenge the way the world thinks about organs.

The repertoire on If You Could Read My Mind features classical favorites known worldwide as well as famous pop songs from the 1960's and 1970's including "Alfie" by Burt Bacharach, "Sisters of Mercy" by Leonard Cohen and the title track by Gordon Lightfoot. The album also includes the world premiere recording of "Music for an Imaginary Film" composed by the artist. If You Could Read My Mind includes a bonus DVD that features six full performances on the new touring organ plus an informational piece about the organ with interview footage, Cameron Carpenter Birth of the International Touring Organ.