I Heard the Angels Singing: Electrifying Black Gospel from The Nashboro Label 1951-1983 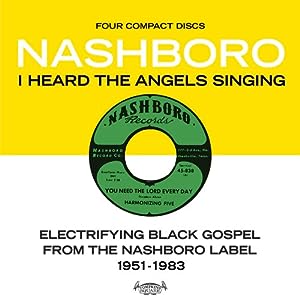 I Heard the Angels Singing: Electrifying Black Gospel from The Nashboro Label 1951-1983

In this first licensed reissue of Nashboro material in decades, this highly influential music, a vital part of the fabric of American music, can finally be heard. Begun by Ernie Young in Nashville, TN, at the height of gospel s golden age, Nashboro was arguably the greatest, most prolific and longest-living gospel record label. Initial recordings were made on site, overseen by Young himself. Those early Nashboro sides have all the excitement, energy and drive of far better-known indies from the 1950s such as Chess and Sun (indeed, Nashboro was parent to the infamous, blues-busting Excello label).
This exceptional set, with detailed liner notes by Opal Louis Nations, mirrors the evolution of the music itself from hard-shouting quartets and riveting solo artists through to organ-driven groups and heavy gospel soul. Among the many highlights are tracks by The Consolers, Swanee Quintet, The Angelic Gospel Singers, The Radio Four, The Supreme Angels, Pilgrim Jubilees, Fairfield Four, Edna Gallmon Cooke, Hightower Brothers, Brooklyn All Stars, Bro. Joe May, Gospel Keynotes, The CBS Trumpeteers, Holmes Sisters, Five Singing Stars, The Jewel Gospel Trio and The Gospel Harmonettes.