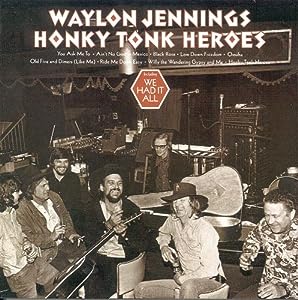 $7.19
As of 2022-11-28 21:35:42 UTC (more info)
Not Available - stock arriving soon
Buy Now from Amazon
Product prices and availability are accurate as of 2022-11-28 21:35:42 UTC and are subject to change. Any price and availability information displayed on http://www.amazon.com/ at the time of purchase will apply to the purchase of this product.
See All Product Reviews

Billy Joe Shaver wrote 11 of the 12 songs on this landmark outlaw country album, given five stars by The All Music Guide . Includes the complete 1973 release, plus the bonus cuts Slow Rollin' Low and You Asked Me To (single version).

According to legend, it was at Willie Nelson's Fourth of July picnic when Waylon Jennings drunkenly promised a nobody named Billy Joe Shaver that he'd record a whole album of his songs. Apparently it wasn't until Shaver threatened physical violence on Jennings (in front of a Nashville studio full of people) that he finally made good on his promise, although Jennings had only recently been granted full artistic control by RCA. The result was a stunning achievement: 1973's Honky Tonk Heroes was the defining record of the anti-Nashville Outlaw movement--the term came after the album--and a cornerstone in country music history. Featuring bare-bones production and plainspoken, hard-nosed lyrics that celebrated personal freedoms and simple pleasures, the record was a far cry from the demure Nashville Sound. In each other, Jennings and Shaver had found a kindred spirit, and together they rewrote the country rulebook. --Marc Greilsamer

American IV: The Man Comes Around from L...

only $8.65
Not Available
View Add to Cart