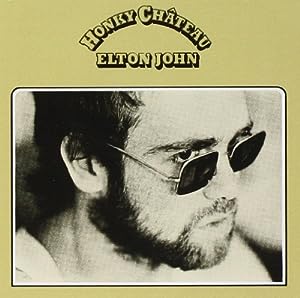 $7.08
As of 2021-10-22 17:32:34 UTC (more info)
Not Available - stock arriving soon
Buy Now from Amazon
Product prices and availability are accurate as of 2021-10-22 17:32:34 UTC and are subject to change. Any price and availability information displayed on http://www.amazon.com/ at the time of purchase will apply to the purchase of this product.
See All Product Reviews

An early-'70s singer-songwriter classic and Elton's first #1! The John/Taupin mojo was workin' on this 1972 smash, producing the Top 10s Rocket Man and Honky Cat plus tender tunes like Mona Lisas and Mad Hatters .

By 1972, Elton John was already a rising star in America, although most casual listeners still identified him as part of the singer/songwriter explosion, thanks to the success of "Your Song" and "Levon." Honky Château changed all that, beginning with the success of "Honky Cat," a rousing New Orleans-ish R&B powerhouse that kicks off this terrific collection of songs. This was the album that first revealed John as a pure-pop craftsman, and he's all over the musical map on this set, moving from country-ish rock to blues-based rockers. But the best things here still might be two gorgeous ballads: "Mona Lisas & Mad Hatters" (displaying the young vocalist at his best) and the hit single "Rocket Man" (which had many rock fans debating which was the better space odyssey of the day--this or Bowie's). And lyricist Bernie Taupin was revealing a new, slightly darker side here via tunes like "I Think I'm Gonna Kill Myself." --Bill Holdship