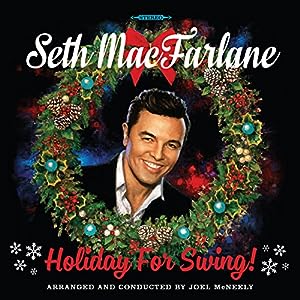 $6.89
As of 2021-04-18 11:17:07 UTC (more info)
Not Available - stock arriving soon
Buy Now from Amazon
Product prices and availability are accurate as of 2021-04-18 11:17:07 UTC and are subject to change. Any price and availability information displayed on http://www.amazon.com/ at the time of purchase will apply to the purchase of this product.
See All Product Reviews

Academy Award-nominated and Grammy® - nominated writer, singer, actor, producer and director, Seth MacFarlane has recently completed his first-ever Christmas album. Following his critically acclaimed 2011 debut, Music Is Better Than Words, and a 2013 Oscar Nomination for co-writing Everybody Needs a Best Friend from Ted, the record will be available at stores everywhere and digital retailers just in time for the holiday season via Republic Records.

Once again, MacFarlane teamed up with composer, arranger, and producer Joel McNeely. The album features a 52-piece orchestra recorded at the iconic Abbey Road Studios and a bevy of London s premier players. Among the musicians in the orchestra were jazz legend Peter Erskine on the drums and former Frank Sinatra bassist Chuck Berghoffer.

For the album, MacFarlane and McNeely cherry-picked both timeless holiday songs and lesser-known gems. MacFarlane slides from a warm, introspective introduction with a vocal quintet into a bright, up-tempo swing in Let It Snow , and brings a new interpretation to the Lee Gordon rarity Christmas Dreaming . Continuing a longtime friendship and creative partnership, Norah Jones joins him for Seger Ellis and Al Stillman's Little Jack Frost Get Lost , while Sara Bareilles lends her powerful pipes to Frank Loesser s Baby It s Cold Outside .