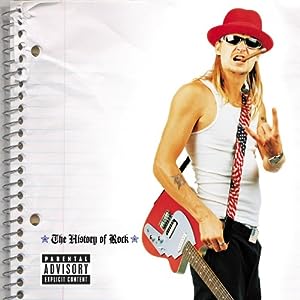 $4.65
As of 2021-07-20 02:14:08 UTC (more info)
Not Available - stock arriving soon
Buy Now from Amazon
Product prices and availability are accurate as of 2021-07-20 02:14:08 UTC and are subject to change. Any price and availability information displayed on http://www.amazon.com/ at the time of purchase will apply to the purchase of this product.
See All Product Reviews

While Kid Rock was unquestionably the rock 'n' roll story of 1999 with the explosive success of his Top Dog/Lava/Atlantic debut, DEVIL WITHOUT A CAUSE, it's important to remember that this envelope-pushing artist comes equipped with a vital history. That said, 2000 marks the release of this specially assembled Kid Rock compilation, comprised of dramatically reworked tracks from the artist's THE POLYFUZE METHOD (1993) and EARLY MORNIN' STONED PIMP (1996) albums - along with a previously unreleased, rafter-rattling recording "American Bad Ass" featuring samples of Metallica's "Sad But True." From these kick ass archives come such gems as the Superfly-flavored "E.M.S.P.," the cool-flowing "Paid," and the gangsta-styled "Ya' Keep On" - all remixed, revamped and unrelenting. It's here that Detroit's Pimp of The Nation is found mastering his verbal skills as well as laying down the genre-busting jams that would soon blow the doors open when brought to bear on his break-out, RIAA seven-times-platinum DEVIL WITHOUT A CAUSE. Hear where it all began!

The History of Rock arrives as the sort of superstardom-celebrating release that can buy a hot-selling artist time. (Think, say, G N' R Lies.) After 8 million (and counting) sales of 1998's Devil Without a Cause, the trailer-rockin' rapper is out to remind the world that it hardly started there. Mostly drawn, and often retooled, from his out-of-print Polyfuze Method and Early Mornin' Stoned Pimp, these tracks display a "funky country hick" already on point with his knowing, hardheaded combo of old-school beats and classic-rock guitars. An "American Bad Ass" for sure, but also an artist who could come only from America, Kid Rock brings the noise--not to mention the bread and the circus. --Rickey Wright

KID ROCK THE HISTORY OF ROCK

Come Over When You're Sober, Pt. 2