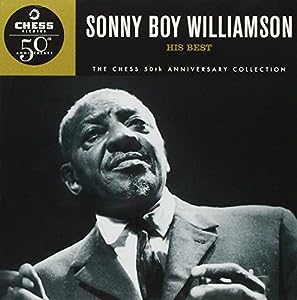 $7.33
As of 2021-07-15 05:15:21 UTC (more info)
Not Available - stock arriving soon
Buy Now from Amazon
Product prices and availability are accurate as of 2021-07-15 05:15:21 UTC and are subject to change. Any price and availability information displayed on http://www.amazon.com/ at the time of purchase will apply to the purchase of this product.
See All Product Reviews

Directly or indirectly, Sonny Boy (a.k.a. Rice Miller) influenced every blues harmonica player after him-Junior Parker, Little Walter and Junior Wells to name a few. But he was also a major contributor to the blues repertoire, leaving behind songs that would inspire generations of artists. This collection features 15 of his classic songs, including Don't Start Me Talkin'; Keep It to Yourself; Help Me; Bring It On Home; One Way Out; Fattening Frogs for Snakes , and more.

This is Sonny Boy Williamson II, whose 1940s Mississippi Delta radio broadcasts for King Biscuit Time made him one of the most influential of all blues musicians. A master harmonica player, he created relaxed songs, often humorous, that reminded urban listeners of their country roots. These tracks are from his years at Chess, beginning in the mid-1950s until his death in 1965. His recording bands feature Muddy Waters, Otis Spann, and Robert Lockwood Jr., among others. Perhaps his best-known track here is "Don't Start Me to Talkin' (I'll Tell You Everything I Know)," but his signature sound is evident on every high trill he played. --Robert Gordon

We're All In This Together