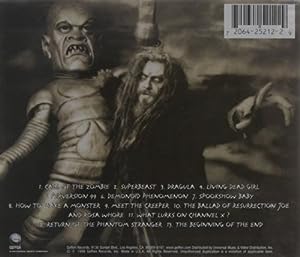 $5.38
As of 2020-03-30 07:20:42 UTC (more info)
Not Available - stock arriving soon
Buy Now from Amazon
Product prices and availability are accurate as of 2020-03-30 07:20:42 UTC and are subject to change. Any price and availability information displayed on http://www.amazon.com/ at the time of purchase will apply to the purchase of this product.
See All Product Reviews

first & most wicked of all the astro creep's solo albums. A classic from 1998, features "Dragula"!!

Malevolent megalomaniac or eerie artiste? Rob Zombie is a bit of both. With spooky metal music that's as colorful and kitschy as its comic art, the singer's solo debut bears more than a little resemblance to his band of many years, White Zombie. These 13 tracks (yeah, there just had to be 13!) continue to explore Zombie's fascination with psychotic noise, pummeling grooves, campy samples, and all things horrific. Instead of just playing dictator, however, this astrocreep allows space for cohorts such as guitarist Danny Lohner and drummers John Tempesta and Tommy Lee to shine darkly. He also shares artistic credit for the LP's elaborate 24-page booklet. Zombie's finely crafted disc is heavy-metal thunder that's turbocharged for the new millennium. --Janiss Garza