Heard It On The X 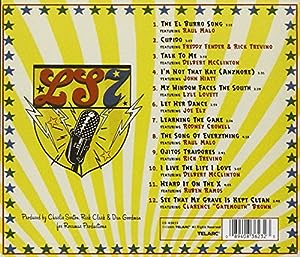 Heard It On The X

$9.92
As of 2022-08-12 19:49:41 UTC (more info)
Not Available - stock arriving soon
Buy Now from Amazon
Product prices and availability are accurate as of 2022-08-12 19:49:41 UTC and are subject to change. Any price and availability information displayed on http://www.amazon.com/ at the time of purchase will apply to the purchase of this product.
See All Product Reviews

'Heard It On The X ' is the third album from the Grammy Award winning Los Super Seven project. Telarc. 2005.

This supergroup with ever-changing personnel (no longer limited to seven) is less a band than a bilingual concept and boundary-crossing vision. The third and most rambunctious release under the Los Super Seven banner takes its title from the ZZ Top anthem celebrating the Mexican border radio of the 1950s and '60s. With the title track sung by Tejano mainstay Ruben Ramos, the transgenerational duet on "Cupid" by Freddy Fender and Rick Trevino, and the alcohol-fueled mariachi of "The El Burro Song" performed by the Mavericks' Raul Malo (a ringer of Cuban descent), the Hispanic imprint on the project remains much in evidence. From the northern side of the musical border, Lyle Lovett revives Bob Wills's "My Window Faces the South," Rodney Crowell renews Buddy Holly's "Learning the Game," and Joe Ely covers Holly acolyte Bobby Fuller's "Let Her Dance."

Perhaps the album's dominant influence is that of the late Doug Sahm, whose Sir Douglas Quintet was a Tex-Mex trailblazer. Sahm's spirit is channeled here through two songs he wrote--"I'm Not that Kat (Anymore)," sung by John Hiatt, and the jazzy "The Song of Everything," performed by Raul Malo--and another one he recorded, "Talk to Me," given a soulful reading by Delbert McClinton. However wide the musical range, the results rarely fall short of super. --Don McLeese

Los Super Seven- Heard It On The X

only $2.27
Not Available
View Add to Cart