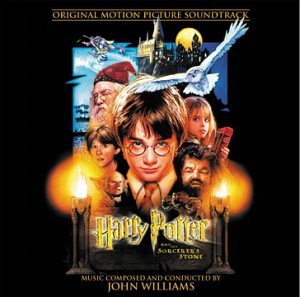 $4.44
As of 2020-03-28 12:36:02 UTC (more info)
Not Available - stock arriving soon
Buy Now from Amazon
Product prices and availability are accurate as of 2020-03-28 12:36:02 UTC and are subject to change. Any price and availability information displayed on http://www.amazon.com/ at the time of purchase will apply to the purchase of this product.
See All Product Reviews

The book that broke all publishing records - selling more than 97 million books in 115 countries in 40 languages - is now the year's most highly anticipated motion picture. Warner Sunset/Atlantic's ORIGINAL MOTION PICTURE SOUNDTRACK: HARRY POTTER AND THE SORCERER'S STONE will feature the film's magical musical score, composed by the renowned John Williams. Best known for his unforgettable scores to such classic films as Jaws, Star Wars, Schindler's List, Superman, and the Indiana Jones trilogy, Williams has taken home a stunning array of awards, including 5 Oscars and 18 Grammys.

Based on the first J.K. Rowling's popular children's novels about Harry Potter and the Sorcerer's Stone tells the story of a boy who learns on his 11th birthday that he is the orphaned son of two powerful wizards and possesses unique magical powers of his own. Summoned from his life as an unwanted child to become a student at Hogwarts School of Witchcraft and Wizardry, Harry meets several similarly-gifted friends who become his closest allies and help him discover the truth about his parents' mysterious deaths at the hands of a powerful adversary.

You needn't see the film of Harry Potter and the Sorcerer's Stone to appreciate the wonder, magic, and fearful chills of J.K. Rowling's phenomenal bestseller in John Williams's outstanding score. Williams typically avoids the source material for the films he scores, but he reportedly derived great pleasure and inspiration from Rowling's first Harry Potter adventure, and created a perfect motif (fully expressed in "Hedwig's Theme") to dominate his score. It's first heard as a dreamy celesta waltz and embellished through myriad incarnations and moods, often with a sinister edge befitting the darker tones of Chris Columbus's direction. Evident are fantastical allusions to Saint-Saëns and Tchaikovsky (among others), and Williams's epic track is "Quidditch Match," a breathtaking frenzy to accompany the film's dazzling highlight. And while Williams occasionally flirts with self-plagiarism (with inevitable variants of his Hook and Star Wars themes), this is nevertheless a richly regal score that brilliantly evokes the mystery and magic of Harry Potter's world. --Jeff Shannon