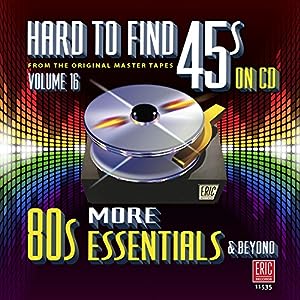 $15.64
As of 2020-09-17 06:52:21 UTC (more info)
Not Available - stock arriving soon
Buy Now from Amazon
Product prices and availability are accurate as of 2020-09-17 06:52:21 UTC and are subject to change. Any price and availability information displayed on http://www.amazon.com/ at the time of purchase will apply to the purchase of this product.
See All Product Reviews

Pump up the volume! No single phrase captures the sound of the 1980's better. Big, loud, bold, and brash - even the ballads had power! The 80's were the last golden era of Top 40 radio. This was a magic time when the best music was also the music that filled America's airwaves. Artists like Bruce Springsteen, Michael Jackson, U2 & Prince were at the absolute zenith of their commercial careers, but that was only half the story.

What made radio in the '80s so irresistible were the unexpected, out-of-nowhere hits of every conceivable stripe. We heard it all, back-to-back: hair-sprayed heavy metal, glammed-up dance grooves, artsy folk, funky hip hop, bass-heavy reggae, angry punk, and brightly painted pop. Now, Eric Records has bottled that lightning in one of the first two new volumes of our flagship series in four years: Hard To Find 45s on CD, Volume 16: MORE '80s Essentials & Beyond. Filled with rare songs and scarce single versions, this disc will transport you to a time when greed was good and MTV actually played music videos!

On More '80s Essentials & Beyond we present exactly that sort of eclectic mix to the max - sharply remastered and smartly sequenced for the ultimate '80s experience! Only in that biggest of decades could you hear George Thorogood's blistering blues, "Bad To The Bone" (presented for the first time on CD in its single version) next to Soft Cell's synthesizer-soul medley, "Tainted Love/Where Did Our Love Go" (heard here in its super-rare radio edit). Your head will spin as you jump from Roxette's power ballad "Listen To Your Heart" to Modern English's new wave anthem "I Melt With You" (the stereo single debut) to Inner Circle's "Bad Boys," which became one of TV's most recognizable themes thanks to the show COPS. And, we've collected both of Suzanne Vega's biggest hits - the D.N.A. remix of "Tom's Diner" and perhaps the only #3 hit about child abuse, "Luka."

Those are just a few of the 20 hot tracks (13 Top 20 hits, three #1s-79 minutes of music) that make this a totally tubular '80s adventure. Just like we've previously done with the '60s and '70s, Hard To Find 45s on CD, Vol. 16 brings you the best of the '80s and early '90s in audiophile-quality sound and original radio-hit versions. On MORE '80s Essentials & Beyond, these classic singles sound the best they'll ever be! Where's the beef? Right here!

In A Sentimental Mood