Half the Perfect World 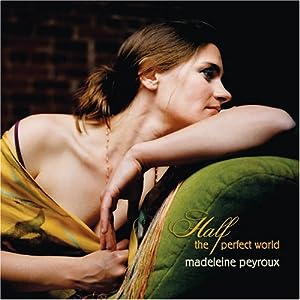 Half the Perfect World

$6.85
As of 2022-09-27 19:21:19 UTC (more info)
Not Available - stock arriving soon
Buy Now from Amazon
Product prices and availability are accurate as of 2022-09-27 19:21:19 UTC and are subject to change. Any price and availability information displayed on http://www.amazon.com/ at the time of purchase will apply to the purchase of this product.
See All Product Reviews

Madeleine Peyroux doesn't simply interpret songs, she possesses them and vice versa. Half the Perfect World is the much-anticipated follow-up to Peyroux's breakthrough album, Careless Love, which drew critical raves from around the world and sold more than a million copies. This time around, Peyroux focuses primarily on songs written by artists from her lifetime, including Leonard Cohen, Tom Waits and Fred Neil. The album also features an unforgettable duet with k.d. lang on the Joni Mitchell classic "River" and four original songs co-written by Peyroux, including the single "I'm All Right" which she penned with producer Larry Klein and Steely Dan's Walter Becker. Half the Perfect World is a sublime showcase for Peyroux's eloquent, understated delivery and timeless one-of-a-kind voice.

Smokey-voiced chanteuse Madeleine Peyroux's third CD is a lovely collection of after-hours ruminations and should confirm her rise to fame. Credit producer Larry Klein for doing a bang-up job with the album's sound: the elegant, pared-down arrangements are all brushed drums, acoustic guitars, and cool organ licks. But of course it's Peyroux's voice that brings it all home--preferably one where the shades are drawn, embers are smoldering in the fireplace, and the white wine is kept dry. Two-thirds of the songs are well-chosen covers, including a duet with k.d. lang on Joni Mitchell's "River"; a relaxed version of Fred Neil's "Everybody's Talkin'," from Midnight Cowboy; a delicately lilting samba take on Leonard Cohen and Anjani Thomas's title track; Serge Gainsbourg's "La Javanaise," performed in the original French; and Charlie Chaplin's "Smile," from Modern Times. The four originals, all coauthored by Peyroux, easily keep up with such august company, especially "I'm All Right"--written with Klein and Walter Becker, it captures the easy sophistication of Becker's regular band, Steely Dan. Fans of Norah Jones (whose collaborator Jesse Harris cowrote three of the songs) should gobble up this album, but Peyroux is no mere imitator: She's her own, very real thing. --Elisabeth Vincentelli

Mamma Mia! The Musical Based on the Song...

only $7.41
Not Available
View Add to Cart

Just In Time For Christmas by Nancy Lamo...