Hairspray (Soundtrack to the Motion Picture) 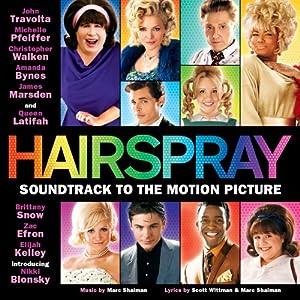 Hairspray (Soundtrack to the Motion Picture)

$23.99
As of 2022-06-16 04:06:10 UTC (more info)
Not Available - stock arriving soon
Buy Now from Amazon
Product prices and availability are accurate as of 2022-06-16 04:06:10 UTC and are subject to change. Any price and availability information displayed on http://www.amazon.com/ at the time of purchase will apply to the purchase of this product.
See All Product Reviews

What fun! This soundtrack of the film adaptation of the Broadway musical overflows with glossy, ol' fashioned '60s-style pep. It won't win any awards for innovation, but it may well be one of the most feel-good releases of the year. While not quite as super-energetic as the original Broadway cast, the new crew ain't too shabby: Nikki Blonsky delivers as Tracy Turnblad and Zac Efron (High School Musical) makes for a devoted boyfriend, and the supporting cast gleefully embraces the show's silly-but-generous spirit. John Travolta (who gets to utter the particularly ironic line "it's been years since someone asked me to dance") goes drag as Tracy’s mom, Edna, while Michelle Pfeiffer's slight stiffness is appropriate for her uptight character, especially on the cha-cha "(The Legend of) Miss Baltimore Crabs." After Mama Morton in Chicago, Queen Latifah puts in another brassy turn as Motormouth Maybelle ("Big, Blonde and Beautiful," which is then reprised by Travolta and Pfeiffer). The show's authors, Marc Shaiman and Scott Wittman, have written three new numbers for the movie: the rollicking (and first single) "Ladies' Choice," "New Girl in Town" and "Come So Far." In addition, the CD also includes two tracks that aren't in the film but were in the show: "Cooties," sung by Aimee Allen, and "Mama, I’m a Big Girl Now," sung by all three Tracy Turnblads: Blonsky, Ricki Lake (from the source movie) and Marissa Jaret Winokur (from the original Broadway cast). --Elisabeth Vincentelli