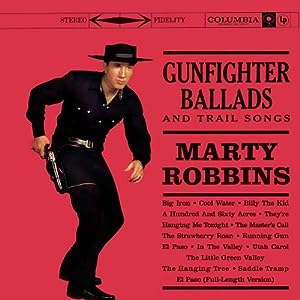 $6.55
As of 2022-11-30 05:14:10 UTC (more info)
Not Available - stock arriving soon
Buy Now from Amazon
Product prices and availability are accurate as of 2022-11-30 05:14:10 UTC and are subject to change. Any price and availability information displayed on http://www.amazon.com/ at the time of purchase will apply to the purchase of this product.
See All Product Reviews

We've sold a ton of Marty's legendary 1959 concept album about the Old West on expensive import, but now it's out domestically with the rare B-sides The Hanging Tree; Saddle Tramp , and the long version of El Paso joining such classics as Big Iron and Billy the Kid !

A lonely Westerner in Nashville, Marty Robbins salved his soul by cutting an album (in one afternoon) of mostly self-composed cowboy ballads. One of them was a four-and-a-half-minute epic, "El Paso," that broke every rule of Top 40 programming to become a No. 1 pop and country hit in 1960. Robbins was arguably the most surefooted and accomplished singer in all country music, and that was never more obvious than on these Western ballads performed to often breathtaking perfection with a very small group and a vocal trio. Other titles include "Big Iron" (also a Top 30 hit), "Running Gun," and Western classics like "Cool Water," "Billy the Kid," and "The Strawberry Roan." Three extra tracks flesh out the 1999 release, including "Saddle Tramp" (the B-side of "Big Iron") and "The Hanging Tree" (title song from the 1959 Gary Cooper Western). --Colin Escott

Live In No Shoes Nation