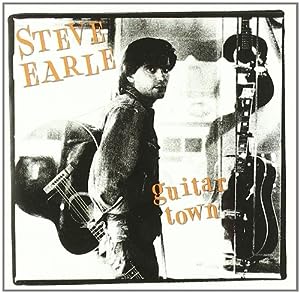 $5.65
As of 2022-01-19 20:36:28 UTC (more info)
Not Available - stock arriving soon
Buy Now from Amazon
Product prices and availability are accurate as of 2022-01-19 20:36:28 UTC and are subject to change. Any price and availability information displayed on http://www.amazon.com/ at the time of purchase will apply to the purchase of this product.
See All Product Reviews

Earle's contract with MCA quickly paid dividends as his 1986 debut climbed the pop charts and Guitar Town; Goodbye's All We've Got Left; Someday , and Hillbilly Highway all hit the country charts. A roots-rock triumph, plus a live bonus cut!

On this 1986 debut, Steve Earle burst on the scene as a fully formed songwriting master, synthesizing effortlessly the finest parts of country-folk troubadours like Townes Van Zandt and the anthemic, working-class rock of Bruce Springsteen. "Someday," a country-rock masterpiece about a kid stuck pumping gas in a dead-end town, remains the perfect realization of this style, and with the exception of the slight and silly "Little Rock 'N' Roller," most everything else here (especially "Hillbilly Highway" and the heartbreaking ballad "My Old Friend the Blues") comes awfully close. The 2002 reissue, overseen by Earle and original producer Tony Brown, offers fresh remastering, new liner notes by Earle, and a bonus live version of Springsteen's "State Trooper." --David Cantwell

Straw in the Wind

only $3.60
Not Available
View Add to Cart