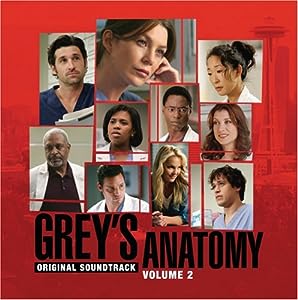 $9.28
As of 2023-02-02 23:44:12 UTC (more info)
Not Available - stock arriving soon
Buy Now from Amazon
Product prices and availability are accurate as of 2023-02-02 23:44:12 UTC and are subject to change. Any price and availability information displayed on http://www.amazon.com/ at the time of purchase will apply to the purchase of this product.
See All Product Reviews

We are happy to stock the fantastic Grey's Anatomy 2.

With so many available recently, it is good to have a name you can trust. The Grey's Anatomy 2 is certainly that and will be a superb purchase.

For this great price, the Grey's Anatomy 2 comes highly respected and is always a regular choice with lots of people. Hollywood Records have included some excellent touches and this results in great value.

This is second soundtrack to the popular ABC Series. This compilation contains such artists as The Fray, Snow Patrol, KT Tunstall, Gomez and Metric, The soundtrack is also being released to coincide with the DVD release of Season 2. The new TV season starts Thursday September 21st.

This soundtrack to the hit TV series starts off with a melancholy ballad by Denver's the Fray (fittingly titled "How to Save a Life"), but the well-curated CD isn't all thoughtful adult alt-rock--reflecting the series' mood changes, it offers a wide range of modern sounds. In addition to the expected acoustical numbers (in this case, from Anya Marina, KT Tunstall, and Snow Patrol's live version of "Chasing Cars"), the album reaches across genres and continents to offer the sunny-'60s-pop vibe of Jim Noir's "I Me You," Jamie Lidell's electro-jazzy "Multiply," the edgy punky-pop aggro of Metric, the rambunctious "Sexy Mistake" from the Chalets, and the winning singalong misanthropy of singer-songwriter Foy Vance's "I Hate Everyone." Ursula 1000's Alex Gimeno lightens up the proceedings with one of his trademark upbeat, hip-gyrating numbers (which seems to pay tribute to Serge Gainsbourg's "Comic Strip"), while the Moonbabies' sweet, swirling harmonies deliver the kind of perfectly crafted pop we've come to expect from the Swedes. If this compilation turns people on to these deserving acts, it will have done its job. --Elisabeth Vincentelli

Down Where the Spirit Meets the Bone

All Things Must Pass [3 LP]

only $4.05
Not Available
View Add to Cart