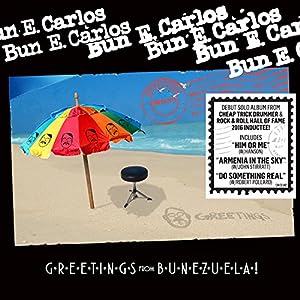 $12.97
As of 2020-09-30 20:10:17 UTC (more info)
Not Available - stock arriving soon
Buy Now from Amazon
Product prices and availability are accurate as of 2020-09-30 20:10:17 UTC and are subject to change. Any price and availability information displayed on http://www.amazon.com/ at the time of purchase will apply to the purchase of this product.
See All Product Reviews

Play this album and find yourself in a land where the vast panorama of rock's history is an endless source of fascination and delight, a fountain of youth burbling with wonderful songs that have fed a discerning rock star's musical diet since childhood. A place where the joy of playing with friends overpowers the need to show off in a spotlight. Where recording an album is a relaxed good time, not a fraught business undertaking. In Earth geography, Bunezuela - with ports of call in Chicago, Milwaukee and Rockford, Illinois is located in the great Midwest and ruled over by a kindly potentate: the drummer who was born Brad Carlson but known worldwide as Bun E. Carlos of Cheap Trick. According to the fanciful liner notes inside the band's 1977 debut, the avuncular Bun a Venezuelan native from a family instrumental in the building of the Panama Canal - is short for Bunezuela. It's a good story, but the truth is better.

With his musical stature and fame recently certified by induction into the Rock and Roll Hall of Fame, Carlos remains as dedicated a rock and roll consumer as he was growing up in Rockford.

On the other end of the spectrum, you d be surprised and disappointed to discover how many of your idols know a lot less about music other than theirs - than you do. He's still an inveterate record buyer and was a well known tape trader back in the day. If anyone has the taste and knowledge to make an album of other people's songs, Bun E. is your man.

Says Bun: For 40 years I've been talking about doing a covers album. All the bands we grew up with - the Stones, Kinks, Who, Beatles - all of their first albums were covers.

It was the band's election to the Rock and Roll Hall of Fame in December that pushed Carlos to fish out the list of songs he'd been compiling for decades and get busy rounding up players and singers to join him for weekend sessions in local studios.

Greetings From Bunezuela! is a rocking and eclectic set of tunes drawn deep from a serious record collection, mixing the reasonably familiar Tell Me by the Rolling Stones, I Can Only Give You Everything by Them, Him or Me by Paul Revere and the Raiders and Dylan's It Takes a Lot to Laugh, It Takes a Train to Cry with lesser known classics. Armenia City in the City the cover that opens The Who Sell Out; Idea, a 1968 Bee Gees album track; and expert stumping selections I Love You No More by the Blackstones, Le Cactus by Jacques Dutronc, and Count on Me by the Norwegian new wavers Fra Lippo Lippi.

What you won't hear is a drum solo or Carlos vocals. The goal for Greetings From Bunezuela! was not to put the star up on a throne.
Closes Bun: I just went in to do what Bun E. Carlos does. I had no drummer statement I insisted on making. This record we served the songs.

The End of the Innocence