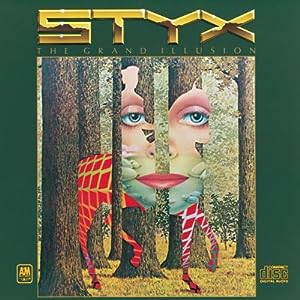 $10.90
As of 2022-11-22 15:48:43 UTC (more info)
Not Available - stock arriving soon
Buy Now from Amazon
Product prices and availability are accurate as of 2022-11-22 15:48:43 UTC and are subject to change. Any price and availability information displayed on http://www.amazon.com/ at the time of purchase will apply to the purchase of this product.
See All Product Reviews

These Chicago rockers went big-time in '77 with this #6 smash. Their soaring songs were now arena-ready: the smash Come Sail Away ; the hit Fooling Yourself (The Angry Young Man) , and more!

More than two decades before it became Eric Cartman's favorite song on South Park, "Come Sail Away" was the choice of music fans with one foot in the art-rock camp and the other in Top 40 pop. The Grand Illusion straddled the seemingly divergent directions as only Styx could, laying on the pomp with layers of keyboards and high-flown lyrical conceits, yet keeping the proceedings light with hook-filled choruses and breezy melodies. Tommy Shaw's engaging "Fooling Yourself (The Angry Young Man)" is the set's highlight, offering a bit of armchair psychology even as it acted as a subtle dig at the snarling punk rockers to whom Styx was anathema. James Young's "Miss America" rocks out, while Dennis DeYoung's title track reminds us that life is fleeting and illusory. Not exactly Nietzsche, but you can dance to it, sort of. --Daniel Durchholz

only $5.78
Not Available
View Add to Cart