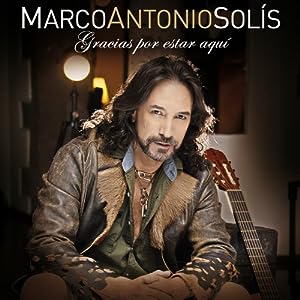 The legendary Mexican Singer, composer and musician Marco Antonio Solis releases his new studio album Gracias Por Estar Aqui . The album features 10 tracks including the first single Tres Semanas , a song written and produced by M.A.S., which holds true to the landmark sound that has characterized some of his biggest hits. Gracias Por Estar Aqui also features a Holiday track named Linda Noche Buena . The release is the first under Universal Music Latino and is the first chapter in the new era of the singer s career.
With a career spanning more than 35 years and over 20 million albums sold world-wide, M.A.S. is one of Latin music s most successful global artists. He is the winner of 3 Latin Grammys and has a star on the Hollywood Walk of Fame