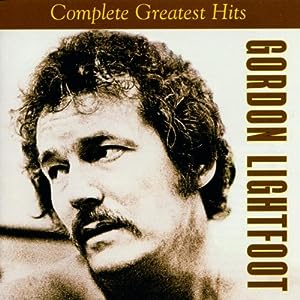 $15.68
As of 2022-08-17 14:59:43 UTC (more info)
Not Available - stock arriving soon
Buy Now from Amazon
Product prices and availability are accurate as of 2022-08-17 14:59:43 UTC and are subject to change. Any price and availability information displayed on http://www.amazon.com/ at the time of purchase will apply to the purchase of this product.
See All Product Reviews

We are delighted to present the famous Gordon Lightfoot - Complete Greatest Hits.

With so many available today, it is great to have a name you can trust. The Gordon Lightfoot - Complete Greatest Hits is certainly that and will be a great buy.

For this reduced price, the Gordon Lightfoot - Complete Greatest Hits is widely recommended and is always a regular choice for many people. Rhino have provided some nice touches and this results in good value.

The most comprehensive single CD collection by this treasured troubadour. These 1965 1987 United Artists, Reprise and Warner Bros. tracks include his Top 10 hits Sundown; If You Could Read My Mind; The Wreck of the Edmund Fitzgerald; Carefree Highway , and 14 more!

Though he rose from the ranks of journeyman '60s folksinger to become a potent and consistent '70s hit maker, Canadian singer-songwriter Gordon Lightfoot's stock in trade was as much hard-eyed, dispassionate observation as romance or poetic whimsy. Perhaps that's why his songs have been covered by everyone from Elvis (this set's "Early Morning Rain") to Dylan. If there's such a thing as an alpha-male folkie, Lightfoot certainly fits the bill. Spanning the tongue-in-cheek chauvinism of 1965's "For Lovin' Me" and the cheatin' ways of "Sundown" to more introspective fare like "If You Could Read My Mind" and "Beautiful," this 20-track collection presents a concise primer on Lightfoot's career and craft. After his career peaked with one of the most unlikely top five hits ever, the gloom-laden 1976 narrative "The Wreck of the Edmund Fitzgerald," Lightfoot's production tailed off sharply, though this anthology's "Stay Loose" ('86) and "Restless" ('93) are testament to his enduring skills as a songwriter and performer. --Jerry McCulley

Chant: Music For The Soul by Decca

Songs from a Room [Vinyl]