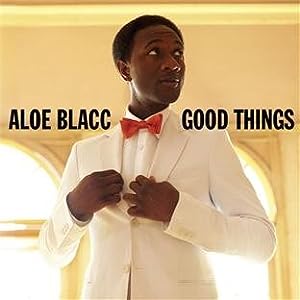 $2.86
As of 2022-08-06 16:35:29 UTC (more info)
Not Available - stock arriving soon
Buy Now from Amazon
Product prices and availability are accurate as of 2022-08-06 16:35:29 UTC and are subject to change. Any price and availability information displayed on http://www.amazon.com/ at the time of purchase will apply to the purchase of this product.
See All Product Reviews

Good Things marks a shift in methodology from personal to political for Aloe Blacc, who refers to the project as his report on present conditions the misappropriation of wealth, pillaging of resources, a universal lack of compassion, and the struggle to survive. Ethereal production from Truth & Soul's Leon Michels and Jeff Silverman mask a foreboding undercurrent in which Aloe crafts lyrics both thoughtful and thought-provoking. Nowhere is this more evident than on lead single, "I Need a Dollar" chosen by HBO as the theme music for the series How to Make It in America.

The first-generation American offspring of Panamanian parents, Aloe has become what writer and activist Amiri Baraka once said of John Coltrane: He is a singular scope of feeling...a more fixed traveler who has found cohesion in art and life. The path from his debut Shine Through in 2006 to Good Things is akin to the maturation of Marvin Gaye between That s the Way Love Is and the What's Going On masterwork that followed. Aloe has never purported to be any heir to Gaye, but musically, Good Things and What's Going On are companion pieces as both albums establish a character for the artists that sets them apart from the sea of performers making very vivid and discernible yet normative and conformist statements about who they are and what they do. Good Things is a definitive declaration that places Aloe directly in the framework of modern soul.