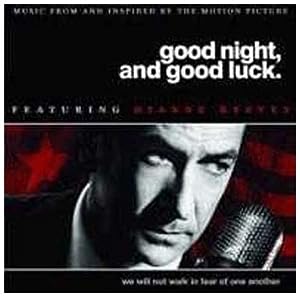 $7.50
As of 2021-07-28 17:47:52 UTC (more info)
Not Available - stock arriving soon
Buy Now from Amazon
Product prices and availability are accurate as of 2021-07-28 17:47:52 UTC and are subject to change. Any price and availability information displayed on http://www.amazon.com/ at the time of purchase will apply to the purchase of this product.
See All Product Reviews

Good Night & Good Luck is set in the 1950's and shot in Black and White, this soundtrack plays in integral part in the movie, helping to greatly set the appropriate mood. Jazz legend Dianne Reeves sings on every track, except for one instrumental piece. Her vocal mastery makes each jazz standard selection her own, plus one new original song 'Who's Minding The Store?'. Concord. 2005.

Dianne Reeves's cool contralto, fronted by a quicksilver combo featuring saxophonist Matt Catingub and pianist Peter Martin, provides the flowing jazz soundtrack to George Clooney's 1950s, film detailing the epic struggle between the legendary TV newsman Edward R. Murrow and the Communist-baiting Senator Joseph McCarthy. Reeves' delivery is flawless and swinging on these mostly mid-tempo/ballad takes on several timeless classics (including Nat King Cole's "Straighten Up and Fly Right," Duke Ellington's "Solitude," and the bouncy Dinah Washington hit "TV is the Thing This Year"). Two other selections, "Pick Yourself Up" and "Too Close for Comfort," dance with a Latin lilt; the lone instrumental, "When I Fall in Love," is as romantic as they come. Mr. Murrow, who profiled both Ellington and Louis Armstrong on his pioneering See it Now show, loved jazz, so it's fitting that the music's grounding in freedom of expression and improvisation counterweighs the horrors of McCarthy's liberty-killing abuses. --Eugene Holley, Jr.

only $2.92
Not Available
View Add to Cart