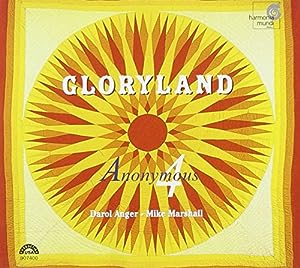 $15.34
As of 2021-10-16 06:41:43 UTC (more info)
Not Available - stock arriving soon
Buy Now from Amazon
Product prices and availability are accurate as of 2021-10-16 06:41:43 UTC and are subject to change. Any price and availability information displayed on http://www.amazon.com/ at the time of purchase will apply to the purchase of this product.
See All Product Reviews

On the heels of their successful hit album AMERICAN ANGELS, the four-woman vocal group Anonymous 4 sets off on another musical journey into the rich songbook of traditional American folk music on the stunning new album GLORYLAND. Conceived as a collaboration between A4 and and new-grass stars Darol Anger and Mike Marshall, GLORYLAND layers together lyric folk songs, religious ballads, shape-note tunes, and spiritual and gospel hymns into a musical tapestry that shimmers with joy and creativity.

Having left medieval chant and somewhat later polyphony behind and moved, musically, across the Atlantic with their last CD (American Angels), the women of Anonymous 4 are still exploring. For their move up a few centuries, their impeccable tonal purity remains, but a decidedly American twang has been added to some of the folksier, Southern mountain-based tunes and revival songs. It's as accurate and enchanting as everything else they do. Their sense of history, the when and where of the music they perform, manages to avoid academic stuffiness: this music communicates. Hymns, ballads, and revival songs make up Gloryland, and the 4 have added superb instrumentalists--Darol Anger and Mike Marshall on fiddles, mandolins, and guitars--to the mix on about half the selections. Some of the songs are begun in simple solfege* (fa, sol, la, mi, etc.) and then are sung with the actual text. Some are presented as duets or solos, and "I'm on My Journey Home" is sung by all four women; some are simple, others delightfully rich harmonically. Irresistible. --Robert Levine * Often called "shape-note" singing because the tones were frequently notated in differently shaped symbols for teaching purposes (fa = triangle, sol = circle, etc.).