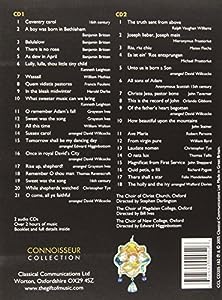 $26.03
As of 2022-07-29 16:21:54 UTC (more info)
Not Available - stock arriving soon
Buy Now from Amazon
Product prices and availability are accurate as of 2022-07-29 16:21:54 UTC and are subject to change. Any price and availability information displayed on http://www.amazon.com/ at the time of purchase will apply to the purchase of this product.
See All Product Reviews

Choral music has flourished in Oxford for over 600 years, and principally in the ancient foundations at New College, Magdalen College, and Christ Church. New College, founded in 1379 with sixteen choristers and three singing-men, was first on the scene, and was the sole major choral foundation in Oxford until the choir at Magdalen was established just over a hundred years later in 1480. Both institutions were founded by bishops of Winchester (William of Wyckham and William of Waynflete, respectively), although the choir at Magdalen was conceived at a time when musical composition and the role of the choir were fundamentally different: the medieval music of the late 14th and early 15th centuries was small scale, mostly in three and (more rarely) four parts, and the vocal compass of each composition rarely exceeded two octaves. By the second half of the 15th century, however, there was a veritable explosion in compositional endeavour; works were conceived on a broad canvas, single works lasting up to 10 or 15 minutes in performance, and vocal ranges extending to three octaves. To this end, Waynflete endowed Magdalen with sixteen choristers and eight singing-men capable of tackling the most elaborate music of the time, such as that preserved in the Eton Choirbook. The last, and most elaborate choral foundation was that of Cardinal College (now Christ Church). Cardinal Thomas Wolsey, a Magdalen man, set up his own Oxford college in 1526 and, according to his nature, demanded the best. The collegiate buildings were constructed on the grandest scale, and the choir, with sixteen choristers and twelve men and led by the great John Taverner, contained some of the finest singers in England, some hand-picked by Wolsey himself.

A refined selection from the best of our Christmas music, performed by the pick of the traditional Oxford choirs on our label. There is music from the Middle Ages to modern times (including some twentieth century favourites), with an emphasis on the English choral tradition. Gloria comes with detailed notes on the history of Christmas music in England.

Christmas Is A Special Day