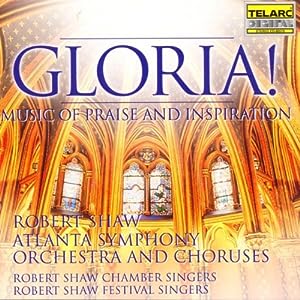 $14.93
As of 2021-07-28 07:46:07 UTC (more info)
Not Available - stock arriving soon
Buy Now from Amazon
Product prices and availability are accurate as of 2021-07-28 07:46:07 UTC and are subject to change. Any price and availability information displayed on http://www.amazon.com/ at the time of purchase will apply to the purchase of this product.
See All Product Reviews

This compilation features excerpts from some of the greatest sacred works in the literature--including Bach's Mass in B Minor, Handel's Messiah, Beethoven's Missa solemnis, and Verdi's Requiem--all led by Robert Shaw. The selections, from recordings made between 1983 and 1997 by Shaw and various ensembles including the Atlanta Symphony Orchestra and Chorus, are presented more or less in order of their composition, from Vivaldi's Gloria to Arvo Pärt's Magnificat. Especially thrilling is the complete "Gloria" from the Missa solemnis, 17 minutes of sheer grandeur, and the Sanctus movements from the Requiems of Verdi and Maurice Duruflé. --Ted Libbey

Tchaikovsky: The Nutcracker - Complete B...