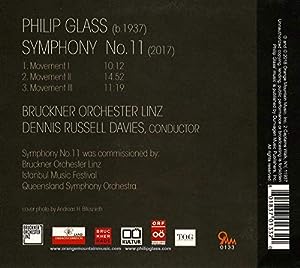 $12.29
As of 2022-10-02 02:36:14 UTC (more info)
Not Available - stock arriving soon
Buy Now from Amazon
Product prices and availability are accurate as of 2022-10-02 02:36:14 UTC and are subject to change. Any price and availability information displayed on http://www.amazon.com/ at the time of purchase will apply to the purchase of this product.
See All Product Reviews

Philip Glass turned 80, and to celebrate, the composer, conductor Dennis Russell Davies, singer Angélique Kidjo, and the Bruckner Orchester Linz threw a party in Carnegie Hall. The goodie-bag for the audience was the world premiere of Glasss Symphony No. 11, and quite a gift it was.

Before the second half world premiere, the orchestra played the local premieres of Days and Nights in Rocinha and Ifé: Three Yoruba Songs, with Kidjo.

Even with ten previous symphonies, the experience of Glass played by a fulland in this case largeorchestra is still a novelty. In an odd turn against the usual course of things, it is easier (at least in New York), to witness performances of his earlier, avant-garde masterpieces like Music in Similar Motion, and even Einstein on the Beach, than his orchestral music. That latter constitutes a substantial body of work, and is firmly inside the classical tradition.

The recordings of his orchestral works dont convey the warmth and pleasing thickness of his orchestration and the texture of the sound he produces. Tuesdays concert had one thinking that the composer is the Phil Spector of classical music.

The lovely opening music, Rocinha, connected in style, superficially, to the Bolero via a Latin flavor. But the deeper and more satisfying connection was to the concept that seemingly light music could be used as a seduction to deliver considerable expressive depth and musical sophistication, a la Ravel.

While the two works shared the same tools of a constant rhythm and a repeated, limpid melody, Glass had an undulating shape, and the music traded off one melody for another.

The composers style is so prominent that he does not get enough credit for his melodic craft. A Glass line, like those in Rocinha, has a graceful shape and a feeling of weight and fullness that comes from his superb integration, via rhythm, of melodic and harmonic shape and motion. This also gives him the tools to successfully set even the gnarliest prose, like Allen Ginsbergs Wichita Vortex Sutra and the dialogue to Jean Cocteaus film of Beauty and the Beast.

Working with Kidjo, he made Ifé, a setting of three poems that narrate the Yoruban creation myth. The sharp rhythms of the music worked hand in glove with the consonances in the words, and the exactitude and clarity of Kidjos delivery were propulsive. There was little sustained vocalism, and one did miss the opportunity of hearing Kidjo open up her wonderful voice, but this is storytelling music. The singer, her blue and gold gown and head wrap set spectacularly against the black and white concert dress of the orchestra, presided dramatically over the music.

The orchestras playing was skillful and elegant. Davies kept meters and rhythms impeccably clear, and the orchestra held the line of the music with ease. The only flaws in the concert, slight ones, came with Ifé.

Part of the problem was the sound. Kidjo was amplified, the orchestra was not, and both the volume and positioning of her voice in the speakers kept her from integrating sonically with the ensemble. Kidjo was unerring, while the orchestra could not quite nail down a consistent pulse in the opening song, Olodumare.

There were no such issue in the symphony, which was played with such implicit confidence that one felt the music was exactly as the composer imagined.

Glasss new symphony is closely related to two recent predecessors of his, also cast in three movements, Nos. 8 and 9. Those are two of his finest symphonies, and Tuesday night one was tempted to think the Eleventh the finest of all.

The composer stated in a recent interview that while all his symphonies are identifiably histhere were the unmistakable arpeggiationsthey each sound different. The Eleventh had some surprises; the tuba was a prominent voice, with several solo statements in the first two movements, and the percussion section was featured in the third (and final) movement, which started off with a march that sounded fresh off a college gridiron.

Through the first movement and into the second, there was a Brucknerian, dramatic dialogue between the strings and low brass, with an intriguing conversation between the tuba and bass trombone as introductory material to the whole. The structural variety was also unexpected; the first movement could fairly be described as in sonata form, while the middle movementnot quite slowwas divided into a contemplative, lyrical opening section and then a quiet, haunting concluding one. Glass likes rising and falling shapes, and this one descended to a deep, mysterious place.

Those were all elements of how the music worked, and paled in comparison to what the music did. The symphony was full of body-rocking vitality. Glasss forms in the first and third movements built up to climaxes that burst open with joyous excitement. Every moment was compelling in one way or another, whether pointing toward harmonic release, exploding with energy, or just simply lovely. This was forty minutes with neither note nor gesture wasted. The audiencewhich had a welcome complement of young people and parents with childrendelivered rapturous, and deserved, applause to composer and musicians alike.