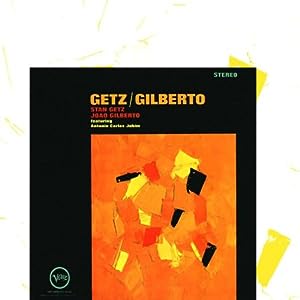 $11.13
As of 2021-09-10 16:56:23 UTC (more info)
Not Available - stock arriving soon
Buy Now from Amazon
Product prices and availability are accurate as of 2021-09-10 16:56:23 UTC and are subject to change. Any price and availability information displayed on http://www.amazon.com/ at the time of purchase will apply to the purchase of this product.
See All Product Reviews

Originally released in March 1964, this collaboration between saxophonist Stan Getz and guitarist João Gilberto came at seemingly the end of the bossa nova craze Getz himself had sparked in 1962 with Jazz Samba, his release with American guitarist Charlie Byrd. Jazz Samba remains the only jazz album to reach number one in the pop charts. In fact, the story goes that Getz had to push for the release of Getz/Gilberto since the company did not want to compete with its own hit; it was a good thing he did. Getz/Gilberto, which featured composer Antonio Carlos Jobim on piano, not only yielded the hit "Girl from Ipanema" (sung by Astrud Gilberto, the guitarist's wife, who had no professional experience) but also "Corcovado" ("Quiet Night")--an instant standard, and the definitive version of "Desafinado." Getz/Gilberto spent 96 weeks in the charts and won four Grammys. It remains one of those rare cases in popular music where commercial success matches artistic merit. Bossa nova's "cool" aesthetic--with its understated rhythms, rich harmonies, and slightly detached delivery--had been influenced, in part, by cool jazz. Gilberto in particular was a Stan Getz fan. Getz, with his lyricism, the bittersweet longing in his sound, and his restrained but strong swing, was the perfect fit. His lines, at once decisive and evanescent, focus the rest of the group's performance without overpowering. A classic. --Fernando Gonzalez