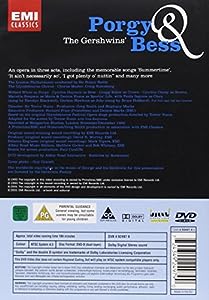 $24.99
As of 2020-09-19 02:19:22 UTC (more info)
Not Available - stock arriving soon
Buy Now from Amazon
Product prices and availability are accurate as of 2020-09-19 02:19:22 UTC and are subject to change. Any price and availability information displayed on http://www.amazon.com/ at the time of purchase will apply to the purchase of this product.
See All Product Reviews

The Gershwins' musical masterpiece Porgy and Bess is one of America's greatest works. This production was adapted for the screen by Trevor Nunn and Yves Baigneres. It was directed by Trevor Nunn and is based on the highly successful staging of the original Glyndebourne Festival Opera production in 1986-87, which was remounted at Covent Garden in the autumn of 1992 with most of the original cast. Immediately after that performance the production was moved to the giant stage at Shepperton Studios, with much expanded sets and lighting. It was then recorded using EMI's original award-winning soundtrack.

First performed in 1935 and based on the play Porgy by DuBose and Dorothy K. Heyward, Porgy and Bess has achieved worldwide renown through such memorable songs as "Summertime," "It Ain't Necessarily So," "I Got Plenty o' Nuttin'," "Oh Lawd, I'm on My Way," and many more, set to Gershwin's moving symphonic score. 184 minutes.

This powerful production originated on the stage of the Glyndebourne Festival. It was restaged and filmed on location for the BBC telecast preserved in this video recording. Director Trevor Nunn takes full advantage of the realism, fluidity of movement, and precision of small details that are difficult to achieve when televising a staged performance but easy and natural in a movie treatment.

Nunn's vision, conveyed by an unusually talented cast, is constantly touching and rises to overwhelming intensity at climactic points. For example: the crap game and fight that end in Robbins's death, the hurricane scene, Crown's capture and abuse of Bess on Kittiwah Island, Porgy's fight with Crown, the comically sinister antics of Sportin' Life, the double-edged pathos and absurdity of the scene in which Bess gets "divorced," and the electrifying conclusion, when Porgy throws away his crutches and sets out, naively, to find Bess in New York.

Musically, Simon Rattle and all the performers find the exact style for Gershwin's marvelous score--not only such big numbers as "Summertime," "Bess, You Is My Woman Now," "I Loves You, Porgy," "I Got Plenty o' Nuttin'," "It Ain't Necessarily So," "I Hates Your Struttin' Style," and "O Lawd, I'm on My Way," but such smaller items as the exquisite cries of the street vendors of honey, strawberries, and crabs. There are no weaknesses in the cast. Willard White and Cynthia Haymon are ideal in the title roles, Gregg Baker is a terrifying, larger-than-life Crown, and Damon Evans is a properly slimy Sportin' Life. The white police officers are splendidly repulsive. --Joe McLellan

Kurtag: Complete Works For Ensemble And ...