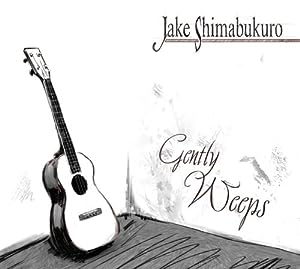 $16.78
As of 2022-06-16 17:44:02 UTC (more info)
Not Available - stock arriving soon
Buy Now from Amazon
Product prices and availability are accurate as of 2022-06-16 17:44:02 UTC and are subject to change. Any price and availability information displayed on http://www.amazon.com/ at the time of purchase will apply to the purchase of this product.
See All Product Reviews

Jake Shimabukuro is one of the most exciting up-and-coming musicians today. Already compares to greats like Hendrix and Clapton for his ability and innovation, word of Jake's breathtaking talent spread worldwide when a video clip of him playing George Harrison's While My Guitar Gently Weeps began circulating the internet last year. Word about the Hawaiian-born ukulele virtuoso is still spreading. Sold-out crowds and standing ovations were a nightly occurrence on his second US tour. Capturing the energy of his live show, Gently Weeps features solo performance repertoire that's causing fans from Los Angeles to New York and New Orleans to Chicago to hail Jake as the next musical legend.

You'll forget all the Tiny Tim, Don Ho, and Hawaiian-music jokes about the ukulele when you hear Gently Weeps, which leaves behind the Roaring Twenties strum and plinky-dink sound of most such music. Jake Shimabukuro sets the tone with the lead-off track from which he takes the album's title, George Harrison's "While My Guitar Gently Weeps," unfolding the vulnerable undertow of Harrison's epic lament. A string of covers follows, as Shimabukuro touches the serene with Schubert's "Ave Maria," evokes a Japanese koto on a Zen-like version of "Sakura," and turns "The Star-Spangled Banner" into a lament. But Shimabukuro's original tunes are just as full of plucked nuance, especially "Heartbeat Dragon," where he uses a slight delay to create a quietly joyful Celtic air. However, don't think it's all wistful melancholy. Shimabukuro whips it out on original tracks like "Let's Dance," alternating hard rhythmic chops with flamenco-like strums. His take on Erroll Garner's "Misty" is a little jive, though I'm sure the hot jazz middle-section pumps the crowds up. Chick Corea's "Spain" fares much better and still scores high on the flash quotient. You just can't keep a fret-burner down, even when his fretboard is toy-sized. You can't keep the Hawaiian out either. Its gentle sway turns up on the sweetly laconic "Angel." A few bonus tracks of generic fusion at the end detract from the solo purity and intimate mood that Shimabukuro creates, but Gently Weeps is a joy until then. --John Diliberto