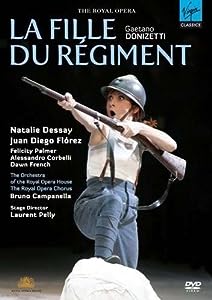 $24.99
As of 2021-12-03 23:51:35 UTC (more info)
Not Available - stock arriving soon
Buy Now from Amazon
Product prices and availability are accurate as of 2021-12-03 23:51:35 UTC and are subject to change. Any price and availability information displayed on http://www.amazon.com/ at the time of purchase will apply to the purchase of this product.
See All Product Reviews

This DVD version of Donizetti’s comic opera zooms right to the top of any list of essential videos for opera fans. It may not be the composer’s best work, but given a top-notch production with world class singing actors, it brings vocal thrills and an abundance of laughs, a combination that’s hard to beat. The stars are Juan Diego Flórez and Natalie Dessay, both unbeatable in bel canto roles, and both in top form here. Flórez’s mellifluous tenor is flexible enough to make child's play of the terrifying (to other tenors) nine high C’s in Ah! mes amis," and supple enough to make his tender love arias moving. Dessay is equally comfortable in the stratospheric coloratura passages and poignant in such heart-tugging set-pieces as her farewell to her regimental "fathers" and her misery as the victim of the Marquise’s well-meaning attempts to teach her to be an aristocratic lady. She’s also a terrific comic actress. In her first appearance she’s doing the regiment’s laundry, and her antics with the iron and the ironing board while singing elaborately difficult coloratura passages induce belly laughs. But then, so do her comic acting in many other scenes, such as her Act II entry in a silk dress and full petticoat, her walk a wonderful parody of a "lady’s" heel-to-toe gait. That moment alone is worth the price of admission. Lesser roles too, are done to perfection. Felicity Palmer, a long-time Covent Garden favorite, is a delicious Marquise de Berkenfield, and Donald Maxwell, is her apt partner as Hortensius, her servant. Sergeant Sulpice, the heroine’s protector, is well-sung and acted by Alessandro Corbelli, and Dawn French almost steals the show as the overbearing Duchess. Conductor Bruno Campanella leads a spirited performance, enhanced by the fine playing by the Orchestra and Chorus of the Royal Opera House. Laurent Pelly’s stage direction is wonderful for its comic touches and Chantal Thomas’ simple but effective sets add to the delights. The video direction efficiently serves the staging, focusing on the action and the singers without adding extraneous shots that detract from the musical flow. All of which makes this DVD a can't-miss for opera fans. --Dan Davis La Fille du regiment is in 16:9 ratio. Sound options include PCM Stereo, Dolby 5.1 Surround and DTS 5.1 Surround. Subtitles include English, French, German, Spanish, and Italian.

My Favorite Opera For Children