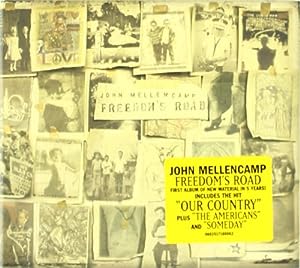 $4.05
As of 2023-01-14 20:11:03 UTC (more info)
Not Available - stock arriving soon
Buy Now from Amazon
Product prices and availability are accurate as of 2023-01-14 20:11:03 UTC and are subject to change. Any price and availability information displayed on http://www.amazon.com/ at the time of purchase will apply to the purchase of this product.
See All Product Reviews

We are proud to stock the famous Freedom's Road.

With so many available these days, it is good to have a brand you can recognise. The Freedom's Road is certainly that and will be a perfect purchase.

For this reduced price, the Freedom's Road is highly respected and is always a popular choice amongst many people. Universal Republic have added some excellent touches and this means great value.

Freedom's Road, the culmination of a year's worth of composing, arranging, recording and mixing is a collection of songs that reflect the climate and concerns of present day America. Lyrically, the album is not overtly political but offers an insightful, plain-spoken perspective on contemporary conditions. The lyrics, contemplative and hopeful, are set off by the garage-born organic sound of Mellencamp and his band. Band members participating in the sessions for Freedom's Road included Mike Wanchic (guitar, vocals), Andy York (guitar, vocals, flute-a-phone), Miriam Sturm (violin), John Gunnell (bass), Dane Clark (drums), and Troye Kinnett (keyboards). The album's tone and themes are underscored by such Mellencamp-penned originals as 'Ghost Towns Along The Highway,' 'Rural Route,' and 'The Americans.' Of the album's title track, Mellencamp notes, `Freedom's Road' is a promise that you have to go through hell to redeem. Billboard called Our Country an appreciable fable of tolerance, hope and empowerment, citing his latest offering as 'a jubilant return.'

The heartland rocker's first album of all-new material in more than five years finds John Mellencamp in full anthem mode. This is his State of the Union address, with guitars that chime like the Byrds heralding sentiments that recall the socially-conscious 1960s, yet sound all the more pertinent today. Balancing the desolate landscape of "Ghost Towns Along the Highway," the hell-on-earth of "Rural Route," and the tolls demanded on the title track's "Freedom's Road" are the embrace of brotherhood on "Someday," the Everyman populism of "The Americans," and the soaring transcendence of "My Aeroplane." Within the context of the album's song cycle, the "Our Country" centerpiece sounds richer and more powerful than it has as a truck commercial--like a roots-rocking sequel to Woody Guthrie's "This Land Is Your Land." Mellencamp enlists Joan Baez for a duet on the protest ballad "Jim Crow," while saving his most blistering political commentary for the unlisted bonus track, "Rodeo Clown." --Don McLeese

This Is War from Virgin Records

only $5.12
Not Available
View Add to Cart

only $7.79
Not Available
View Add to Cart