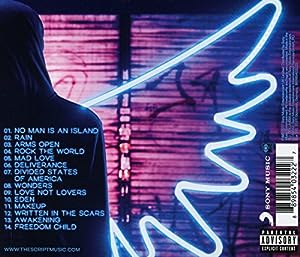 $2.52
As of 2021-09-19 22:30:55 UTC (more info)
Not Available - stock arriving soon
Buy Now from Amazon
Product prices and availability are accurate as of 2021-09-19 22:30:55 UTC and are subject to change. Any price and availability information displayed on http://www.amazon.com/ at the time of purchase will apply to the purchase of this product.
See All Product Reviews

Freedom Child is the new album from The Script, and is the band s fifth full length album. Freedom Child sees the band presenting a collection of urgent, timely, future-facing anthems that speak of both real-life events and real-time sonic adventurism. The album was recorded between London and Los Angeles and for the first time, the band chose to work with an A List of co-writers and producers.

Freedom Child is the follow up to the band s 2014 release, No Sound Without Silence. The new album is being launched with the new single and video, "Rain," an infectious cloudburst of rhythmically-taut, piano-tinged pop with the kind of irresistible chorus that has become a trademark of the tight-knit band.

The Script are one of the world's most successful bands and have sold over 29 million records. Comprised of Danny O'Donoghue, Mark Sheehan, and Glen Plower, the Irish three-piece have scored 3 multi-platinum albums, all of which were # 1 in the UK. The Script have also picked up a huge following in the United States, where they have 4 platinum selling singles to their credit. The Script are also one of the biggest live bands, having sold over 1.4 million tickets across 203 headline shows on their most recent tour.

Tim Burton's The Nightmare Before Christ...

only $6.27
Not Available
View Add to Cart