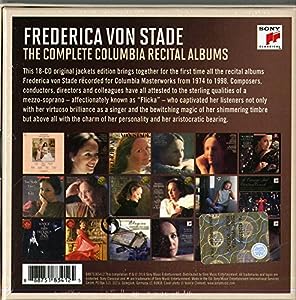 Federica von Stade The Complete Columbia Recital Albums brings together for the first time all the recital albums mezzo-soprano von Stade recorded for Columbia Masterworks from 1974 to 1994. The 17-CD box set features three albums available for the first time on CD. Trained in the bel canto style, Frederica von Stade is known for her roles in Rossini s The Barber of Seville and La Cenerentola. In addition to opera, von Stade has also performed a wide range of musicals, from Show Boat to The Sound of Music and has appeared on numerous PBS specials, most notably 1991 s A Carnegie Hall Christmas Concert which is included in this set. Von Stade is also a respected recital artist, performing works ranging from Mozart and Haydn to Mahler to Broadway show tunes. Her album of Mahler songs was praised as cherishable by Peter G. Davis of The New York Times.

An Organ Blaster: The Best of Michael Mu...