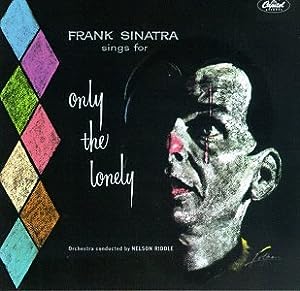 $8.59
As of 2023-01-25 17:01:00 UTC (more info)
Not Available - stock arriving soon
Buy Now from Amazon
Product prices and availability are accurate as of 2023-01-25 17:01:00 UTC and are subject to change. Any price and availability information displayed on http://www.amazon.com/ at the time of purchase will apply to the purchase of this product.
See All Product Reviews

We are delighted to stock the brilliant Frank Sinatra Sings for Only the Lonely.

With so many on offer right now, it is wise to have a brand you can recognise. The Frank Sinatra Sings for Only the Lonely is certainly that and will be a excellent purchase.

For this great price, the Frank Sinatra Sings for Only the Lonely comes widely recommended and is a popular choice amongst most people. Capitol have provided some excellent touches and this means good value.

Look past the tacky, sad-clown velvet painting on the cover (a Grammy-winner for album design in 1959!), there's nothing cheap or sentimental about this record--the bleakest and blackest album of popular songs ever recorded, so quietly powerful it can leave you slumped in your chair with the ice cubes still rattling in your glass. Every single "suicide song" (as Sinatra liked to call 'em) on Only the Lonely is a stunner that will take your breath away. Nelson Riddle's arrangements are like shadows, almost colorless and motionless, so that all you hear is the ache in the singer's voice. "Angel Eyes" and "One for My Baby" each deserve an album to themselves-- so exquisitely moving that at the end of three minutes you feel like you've just heard a lifetime of loneliness. My only regret--and it's a big one--is that this flawless masterpiece doesn't include Billy Strayhorn's "Lush Life," which truly belongs here; Sinatra put it into an already overcrowded recording schedule and, when fatigue and the difficulty of the song defeated him after a couple takes, he gave up and never attempted it again. We got the chillingly lovely "Willow Weep For Me" instead, so I'm really not complaining--but that just adds to the pang of loss that this album expresses so vividly. Drink up! --Jim Emerson