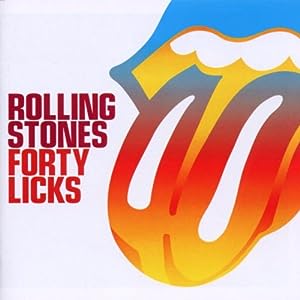 $35.61
As of 2021-07-17 08:58:18 UTC (more info)
Not Available - stock arriving soon
Buy Now from Amazon
Product prices and availability are accurate as of 2021-07-17 08:58:18 UTC and are subject to change. Any price and availability information displayed on http://www.amazon.com/ at the time of purchase will apply to the purchase of this product.
See All Product Reviews

The band that proclaimed itself "The Greatest Rock & Roll Band in the World" has long since represented rock's most overarching confluence of art and commerce--with a distinct emphasis on the latter in recent decades--a notion this 40-track, five-decade-spanning anthology can't completely escape. While this is the first anthology to gather hits from the band's entire career, it's the early tunes that highlight one of the Stones' central ironies: virtually their entire "bad boy" reputation was built working for The Man. That original '60s musical arc bounded from '50s rock and R&B revivalism ("Not Fade Away," "The Last Time") to anti-Mop Top aggression ("Satisfaction," "Get Off My Cloud," "19th Nervous Breakdown") to proto-goth cynicism ("Paint It Black," "Have You Seen Your Mother Baby") and psychedelic minstrelsy ("She's a Rainbow," "Ruby Tuesday") to the epitome of blues-based cock rock ("Street Fighting Man," "Jumpin' Jack Flash") in quick succession. Wresting control of their own destinies--and future copyrights--at the end of the '60s, they'd spend the next 30 years largely recycling their earlier incarnation ad infinitum--their music sprinkled with occasionally successful forays into contemporary club and disco fodder ("Some Girls," "Shattered")--and resting on their well-paid laurels. Unfortunately, the listless quartet of new tracks that flesh out this collection seems little more than another business deal to hype their 2002-03 world tour, with "Don't Stop" arguably the weakest in a long string of post-'80s Stones McSingles. If Jagger seems typically detached here, Keith Richards injects some welcome, craggy warmth into the closing barroom lament, "Losing My Touch." But it's also a performance that suggests his legendary band has become little more to him than "The Greatest Day Job in the World." --Jerry McCulley