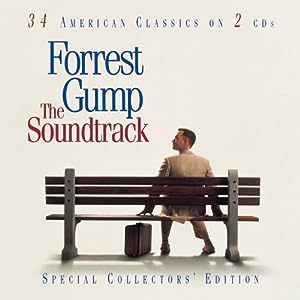 $6.36
As of 2022-11-28 21:05:00 UTC (more info)
Not Available - stock arriving soon
Buy Now from Amazon
Product prices and availability are accurate as of 2022-11-28 21:05:00 UTC and are subject to change. Any price and availability information displayed on http://www.amazon.com/ at the time of purchase will apply to the purchase of this product.
See All Product Reviews

Forrest Gump (1994) is one of the most successful films ever made, winning Tom Hanks his second successive Best Actor Oscar (he won the previous year for Philadelphia) as well as claiming the Best Picture Oscar and many other awards and nominations, including several for music. A unique fable of American life from the 1950s to the 80s, the film blends comedy, drama, war, romance and groundbreaking special effects into a social and political portrait of the passing years, all seen through the eyes of the intellectually challenged but immensely likeable Forrest Gump. The soundtrack is a double album featuring 31 classic pop tunes plus a suite from Alan Silvestri's rich orchestral music, represented more completely on the companion score album. Opening with Elvis Presley's "Hound Dog", this is a fine anthology of three decades of American music, taking in everything from Joan Baez's "Blowin' In The Wind" to Aretha Franklin's "Respect", The Mammas and The Papas' "California Dreamin'" and Simon & Garfunkel's "Mrs. Robinson". Here also is Scott McKenzie with "San Francisco", plus Jefferson Airplane, the Supremes, Lynyrd Skynrd and many more. Like American Graffiti (1973), this is one of the great pop soundtracks, happily at home in just about any music collection. --Gary S. Dalkin

The Very Best of the Eagles