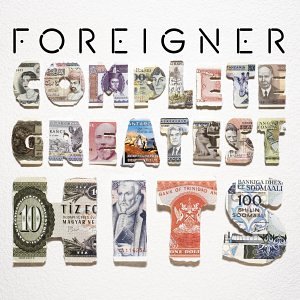 $13.42
As of 2022-01-07 13:29:35 UTC (more info)
Not Available - stock arriving soon
Buy Now from Amazon
Product prices and availability are accurate as of 2022-01-07 13:29:35 UTC and are subject to change. Any price and availability information displayed on http://www.amazon.com/ at the time of purchase will apply to the purchase of this product.
See All Product Reviews

The complete greatest hits packs a single CD with 20 monster hit singles and airplay classics from 8 Foreigner albums released by Atlantic between 1977-1992. Includes radio staples 'Feels Like The First Time', 'Urgent', 'Waiting For A Girl Like You', 'Cold As Ice' and more! Remastered. 2002.

On the cover of Foreigner's newest collection, the letters that spell out Complete Greatest Hits are cut out from world currency. For example, there's an A from Antarctica, a T from Trinidad, an M from Mongolia, and so on. At least the drive behind this third greatest-hits compilation (fourth, if you count The Best of Foreigner Live) is clearly admitted. Still, if anyone deserves your money, an argument can be made for guitarist Mick Jones and singer Lou Gramm. They've been through it all, and along the way, they've written a slew of songs you know well enough to perform at karaoke (but never as well, admittedly--Lou has a hell of a voice). Whether you liked them when they rocked ("Cold as Ice," "Hot Blooded," "Juke Box Hero") or preferred the power ballads they were credited with inventing ("Waiting for a Girl Like You," "I Want to Know What Love Is"), this album makes it feel like the very first time again. --Laura Etling