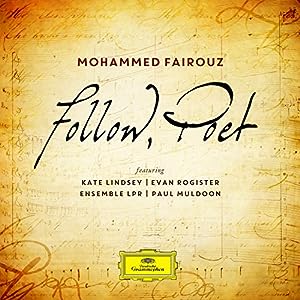 $17.72
As of 2021-07-20 08:15:32 UTC (more info)
Not Available - stock arriving soon
Buy Now from Amazon
Product prices and availability are accurate as of 2021-07-20 08:15:32 UTC and are subject to change. Any price and availability information displayed on http://www.amazon.com/ at the time of purchase will apply to the purchase of this product.
See All Product Reviews

The musical works on this album, Audenesque and Sadat, each exalt the transformative power of language through different means: one poetic, one oratorical. In Audenesque, Fairouz sets verse by the great 20th-century English poet W.H. Auden and late Nobel Prize-winning Irish poet Seamus Heaney; with Sadat, the composer evokes in an instrumental work the stirring life-story of slain Egyptian president Anwar Sadat. Woven among the musical recordings on the album are readings of the Auden and Heaney by Pulitzer Prize-winning Irish poet Paul Muldoon and fragments of spoken word by John F. Kennedy from one of his less-well-known speeches, including this: When power leads man to toward arrogance, poetry reminds him of his limitations. When power narrows the areas of man s concerns, poetry reminds him of the richness and diversity of his existence. When power corrupts, poetry cleanses.

Follow, Poet is the inaugural release for a new series of recordings titled Return to Language, which will explore the artful blending of words and music. The series was conceived by Universal Music Classics president/CEO Elizabeth Sobol, a lifelong lover of literature. I believe in cultivating a respect and love for depth of language and reflection and expression, even in the age of Twitter and YouTube when some of that seems in danger of being eroded, she says. And it has always been the interrelatedness of literature and music that has touched me most deeply in art the exponential power of storytelling when you join words and music.

This album is not only Fairouz s UMC/DG debut, but also the recording debuts for both mezzo-soprano Kate Lindsey and conductor Evan Rogister.